Join me in a journey to live with purpose in every busy day. Receive our monthly newsletter!

As you may know, my family and I are just starting our adoption journey. As I am joining support groups and reading other’s stories, so many touch my heart and only reconfirm our desire to adopt. This is a guest post from Anita at the blog Gillespie Fam about an older boy they met in Ghana while adopting their own son.

It’s 11pm and I thought about copying and pasting a friend’s post about Joson, but I just couldn’t.  I couldn’t because, you see, he’s worth more than that.  This 15 year old child–and he is a CHILD–is worth my time and my sleep and whatever else I can afford to give him. 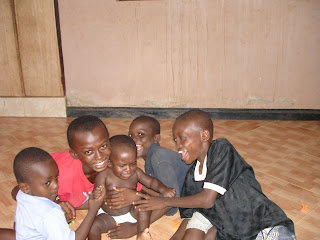 I first met Joson over 5 years ago… just a 10 year old kid with a big round head and the cutest stick-out ears ever! {He’s in the red shirt, hugging Bright.} He was my son Bright’s most loving foster brother at Daddy Paul’s house.  I was still new to Ghana and Joson did so much to make me and my son feel loved.  Just a 10 year old boy, but the Father worked through him to help me feel loved.  I remember calling my husband during that time and telling him, “Eric, I’ve never considered adopting an older child, but meeting Joson makes me think about it for the first time.”

Before I left Ghana that trip, in a quiet voice, Joson asked, “Auntie Anita, will my parents come?”  I didn’t know what to say.  I was only just starting AAI’s program at the time and didn’t know anything.  I just smiled and said, “Maybe so Joson.  Maybe so.” 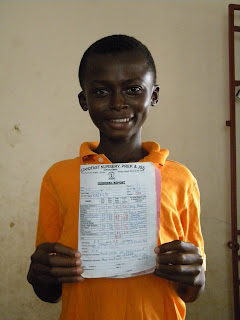 Time went on.  Joson was stuck in a limbo that I won’t go into here, but needless to say, there aren’t many people lining up to adopt 10..11…12 year old boys.  AAI wasn’t allowed the chance to help Joson for a few years.

When I visited Ghana I would always visit Daddy Paul and the boys, including Joson.  This bright eyed child with a smile on his face always greeted me with a hug–nevermind that he was now a young teenager!  “Auntie Anita, will my parents come?”  I had to tell Joson that he should pray and maybe one day he would be adopted.  I had no better answer for him.

Things change and eventually through our program at AAI several children were cared for at Daddy Paul’s foster home again.  Several families began to meet Joson.  Without fail, families would come back to America and ask me, What about Joson?  Anita, can he be adopted?  I was told that Joson couldn’t be adopted, or that he was too old.  I should have questioned this more, but I didn’t.  I didn’t, and for this I owe Joson a lifetime of apologies.

When I visited Ghana a now very tall and lanky Joson would great me with long arms and the same bright smile.  With a bit of embarrassment he asked, “Antie Anita, will my parents come?”  This was only last year and I told Joson that I thought maybe he was too old to be adopted now, but maybe there would be some other way for him to go to America, and that everybody who visited Ghana loved him.  He told me specifically of one or two families who he had a special connection with.

Later last year one of our AAI families came home asking again, “What about Joson Anita?  Why can’t he be adopted?”  At this point something in my spirit said to ask again and to get real answers as to why he couldn’t be adopted.  And as it turned out, they were all assumptions in Ghana, mainly having to do with how old he was, but JOSON HAS ONE YEAR LEFT!  ONE PRECIOUS YEAR!!!!

Joson’s adoption fees are $12,000, of which his family has paid $4000.  His family is also doing everything they can to save and raise funds for travel.  $4000 of Joson’s fees are due IMMEDIATELY so he can go to court.  And the great news is that once those fees are paid, Joson could go to court in about 1 month!  Remember, time is of the essence!!  The last $4000 is due after court.

Here’s the link to the Adoption Advocates International where people can make a tax-deductible donation towards Joson’s adoption. Folks simply need to designate “Grace Fund” and then write “Joson” in the blank spot below. They can also make a donation by PHONE by calling the office and asking for Kathy and letting her know that the donation is for Joson: 360-452-4777.

**Please, pass news of Joson’s Journey on to others you know who may be able to contribute.

Get the latest delicious goodness straight to your inbox!

Emily is a busy mom of five kids, four of whom came to the family through international adoption. She is a big believer that you can live with purpose in every busy day. Join us in the journey to live purposeful, intentional lives in the midst of all the craziness.

Join me on a journey to live with purpose in every busy day.

Busy Mommy is a participant in the Amazon Services LLC Associates Program, an affiliate advertising program designed to provide a means for sites to earn advertising fees by advertising and linking to amazon.com

This error message is only visible to WordPress admins


Error: API requests are being delayed. New posts will not be retrieved.

Error: API requests are being delayed for this account. New posts will not be retrieved.

Make sure this account has posts available on instagram.com.